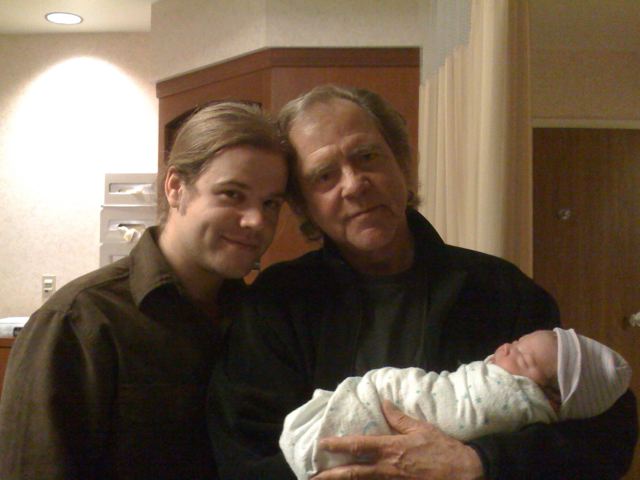 Howdy,
I'm a grandfather! Born on Obamaday, 1-20-09, Elliot Cole Johnson could not have picked a better moment to enter this world. I held him in my arms when he was an hour old. He was already a knockout. Mom's doing well, Dad's nervous. I'm shining.

I had a great December mostly. It started with a couple of shows in Marion, IA with Prudence Johnson. She's so fine. So very Swedish too, I might add. During one of our rehearsals I told her a joke. She said "That's funny." No laughter at all, just totally straight faced "That's funny." Very Swedish. Also maybe the best singer I've ever worked with.

I decided to drive the whole tour by myself. 6,700 miles in 5 weeks. In my new little Mazda with those crappy mid-line tires you get when you buy a new car. I was slippin around quite bit in Chicago. Only got stuck twice. His name is Spud. They drive better when you name 'em.

As you might imagine, life gets pretty simple on the road: just stab it and steer it, sing, eat, sleep and do it all over again the next day. The best audience is room full of strangers they say; you can lay it on pretty thick as far as the schtick goes – the patter, the stories. Then the next time you come to town you're thinking "Well, they're on to me now!", so you have to lighten up a bit.

It was all going along fine until I hit the wall in St. Cloud during intermission. My strings had died and I felt like I was on my way out too. The kind of thing where you know that you're not going to recover with a good nights' sleep and healthy little breakfast. I had forgotten all about the endurance/stamina wall. You think I'd remember after some of the stuff I've put myself through. Turned out to be pneumonia. Too much pushing, too much bad food, too little sleep, too many miles. I still had 3½ shows to go, plus probably 1,500 miles to drive. Thanks to Michael Monroe and Deb Mueller for ministering to me in the middle of the night up in Grand Marais. That's something I'll never forget.

So when I got home I went to bed for 2 weeks. Antibiotics, etc. I'm feeling a lot better but it's a slow thing to recover from. Gotta be a good boy. My studio is up. I'll be recording when I get back home.

There's so much to do. But you know, it's only never ending if you don't start. It's a more hopeful world now, what with Elliot and Obama and all. And I for one would rather go through tough times with a good leader than . . . well, you know.