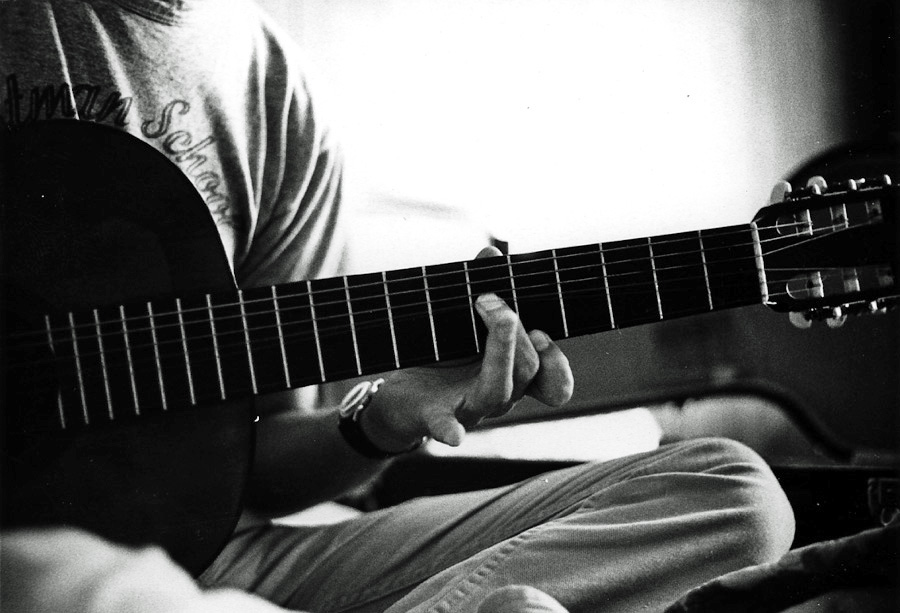 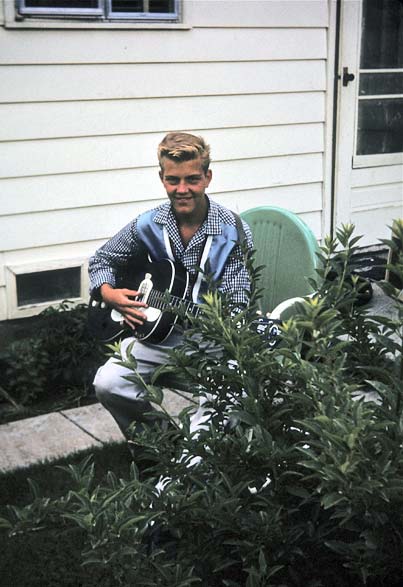 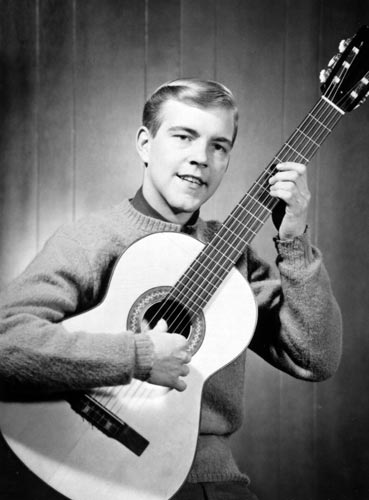 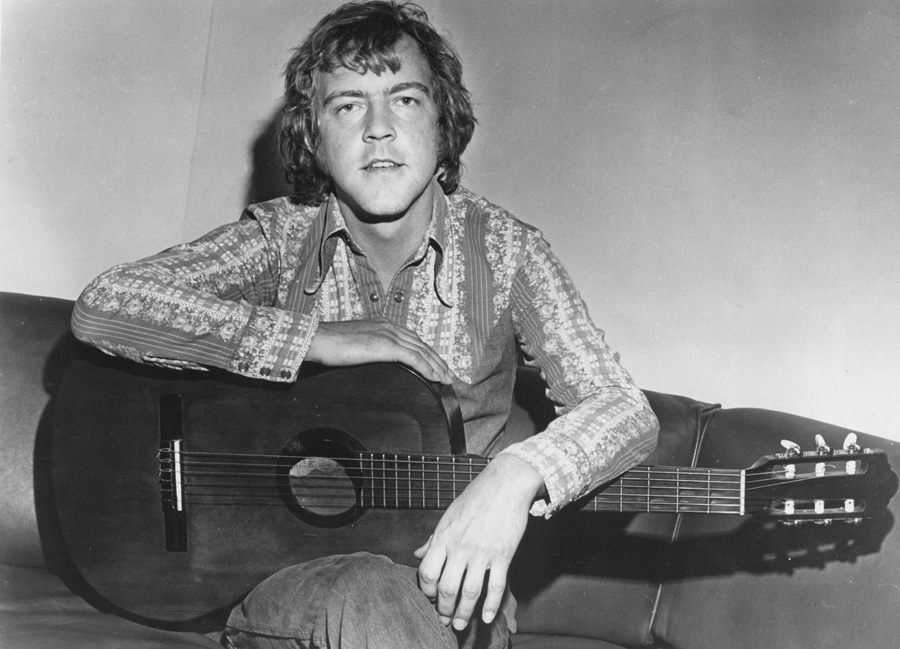 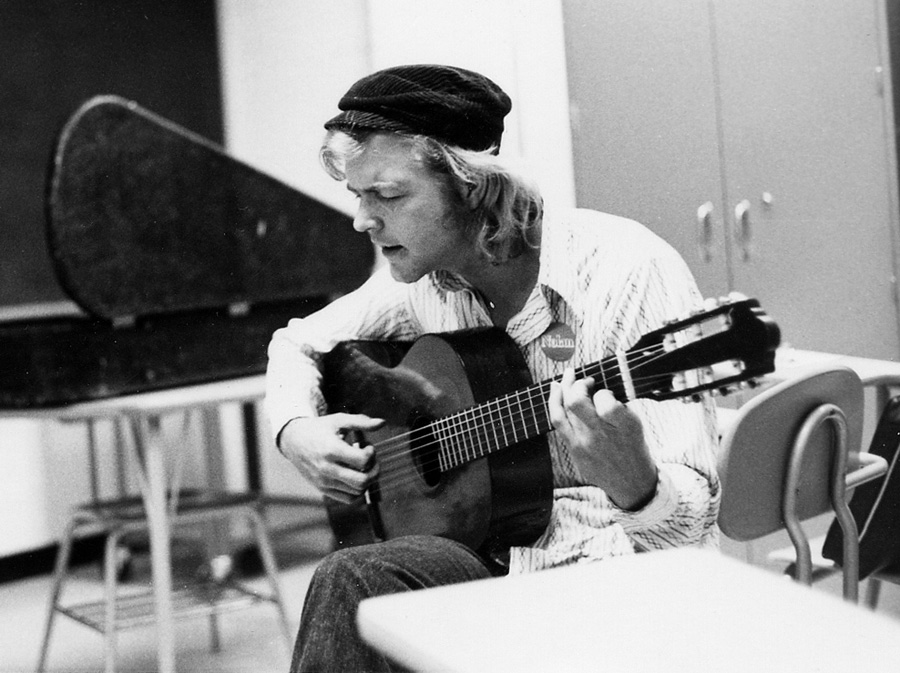 "Guild Mark IV classical guitar. The top had been damaged, and a guy in a small shop in a subway station in Barcelona had replaced it with an old Fleta top."--MJ 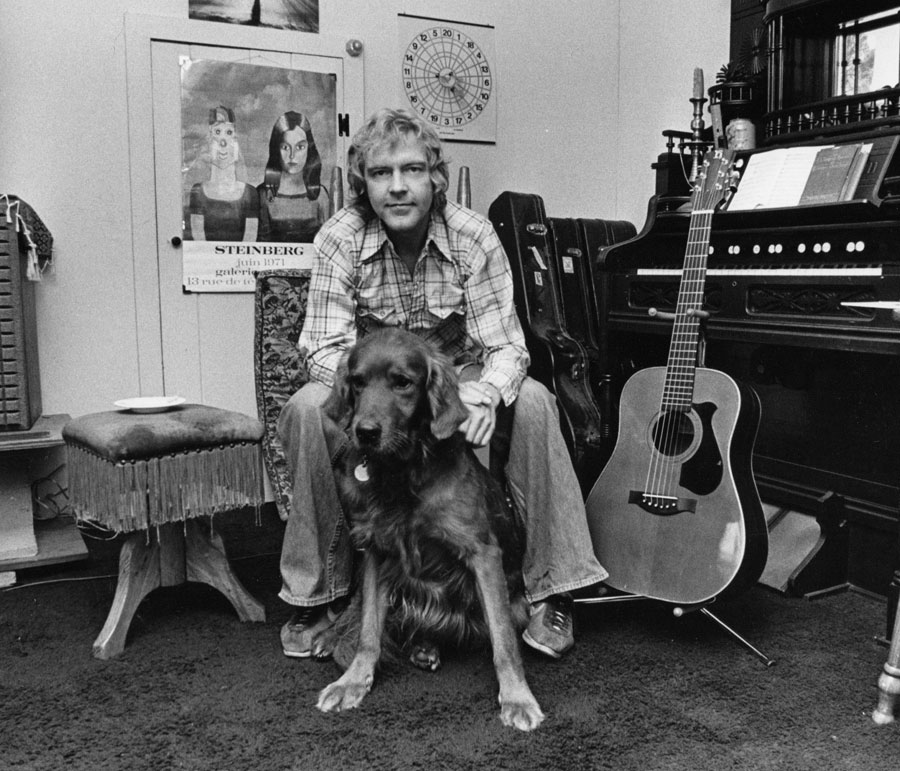 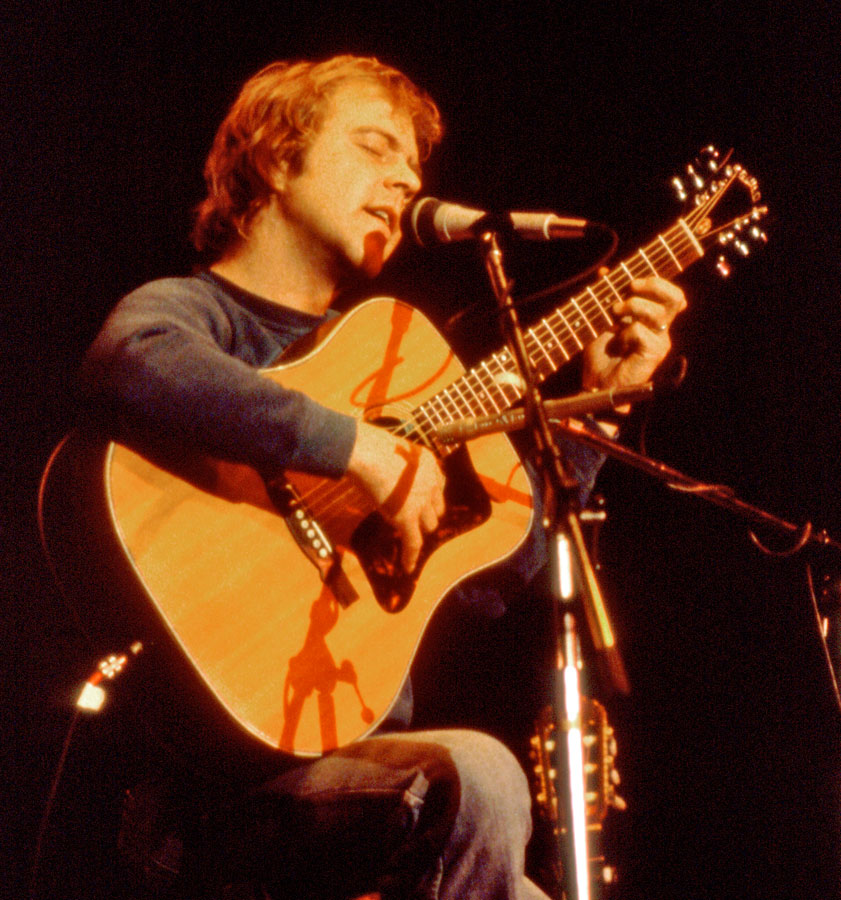 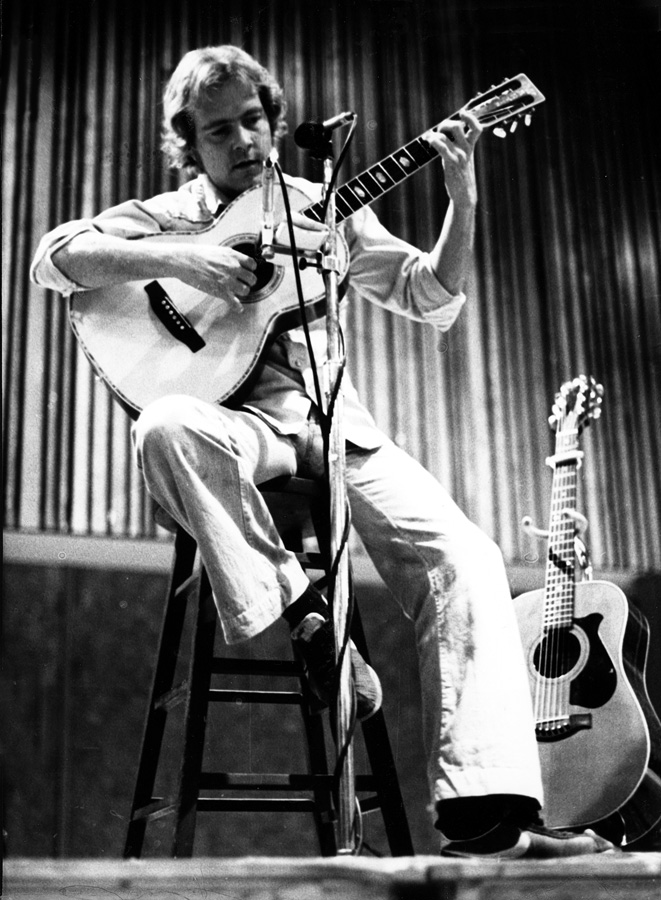 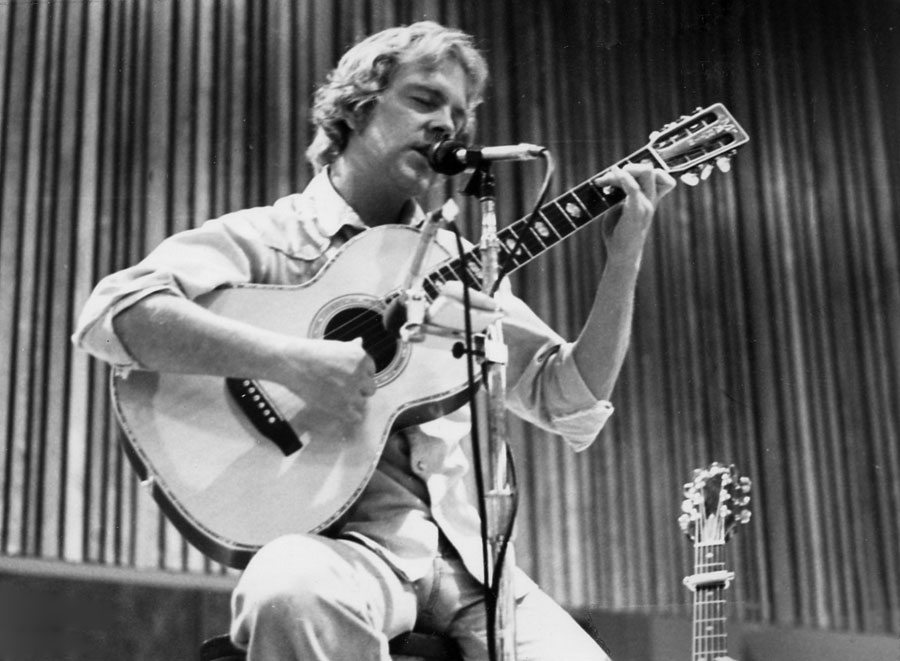 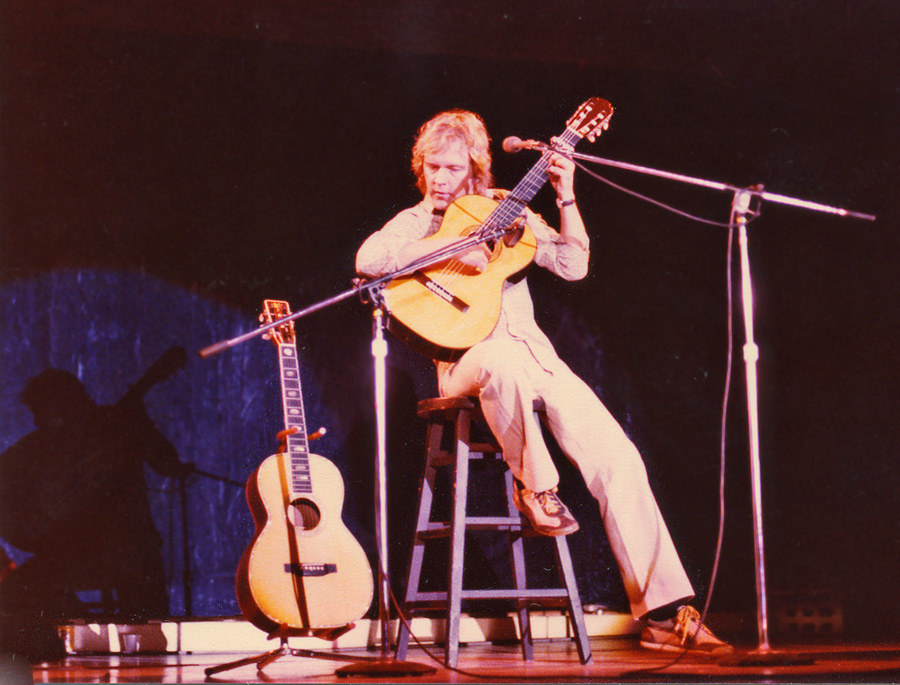 Martin guitar
MJ's High-strung/hi-strung guitar. 1974 interview clip w/MJ below. He says it's a Martin 00018 but the Martin online commuinity says from the inlay and the bridge shape it's a 00-45, possibly custom made.
(Full show on YouTube) 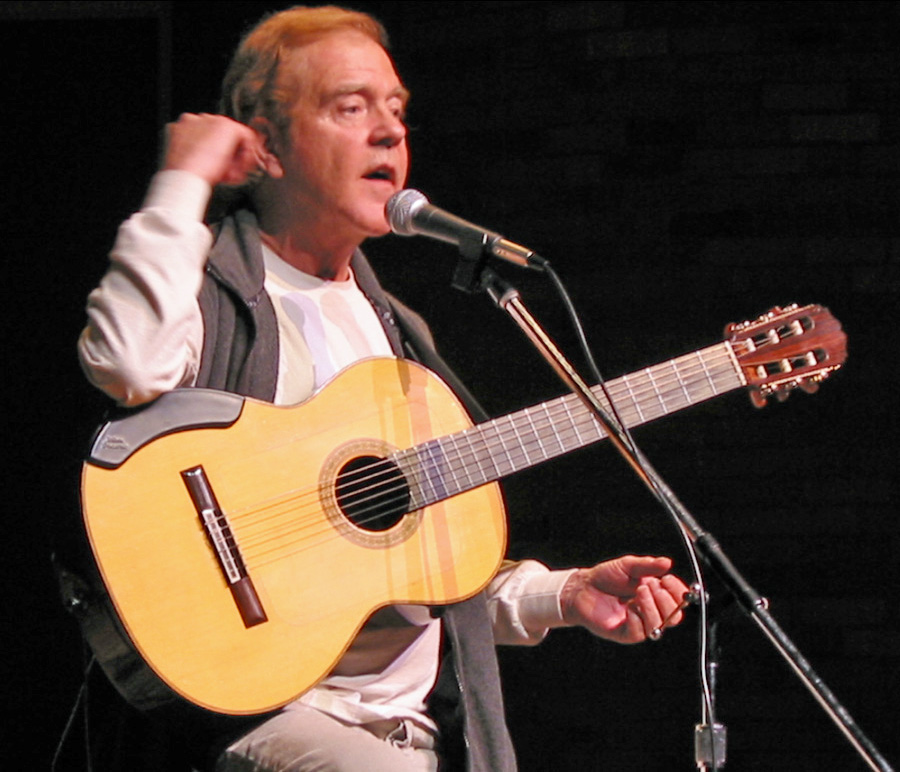 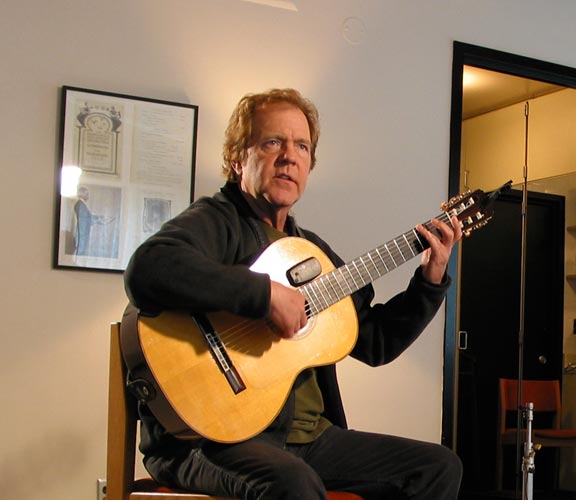 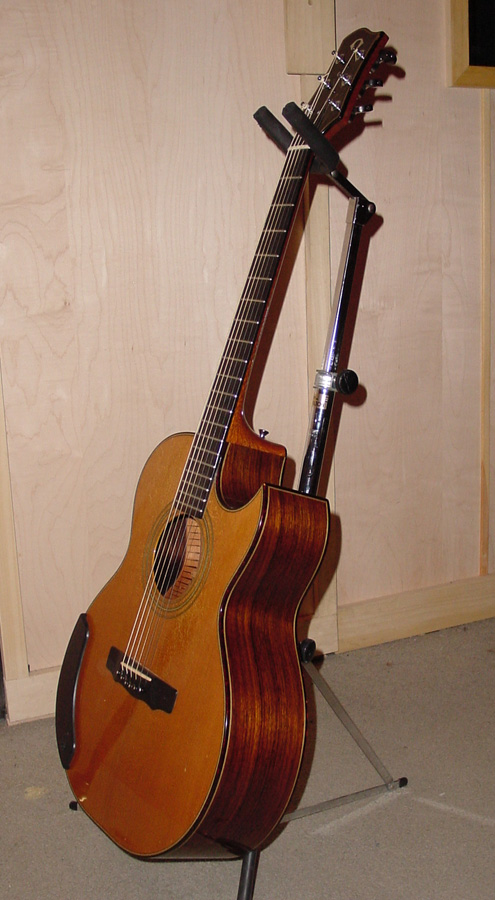 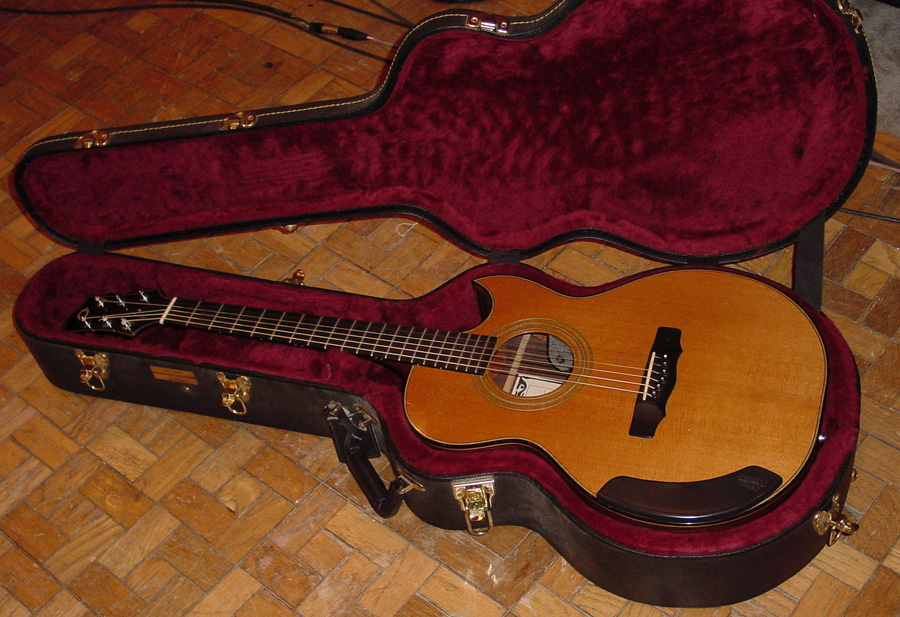 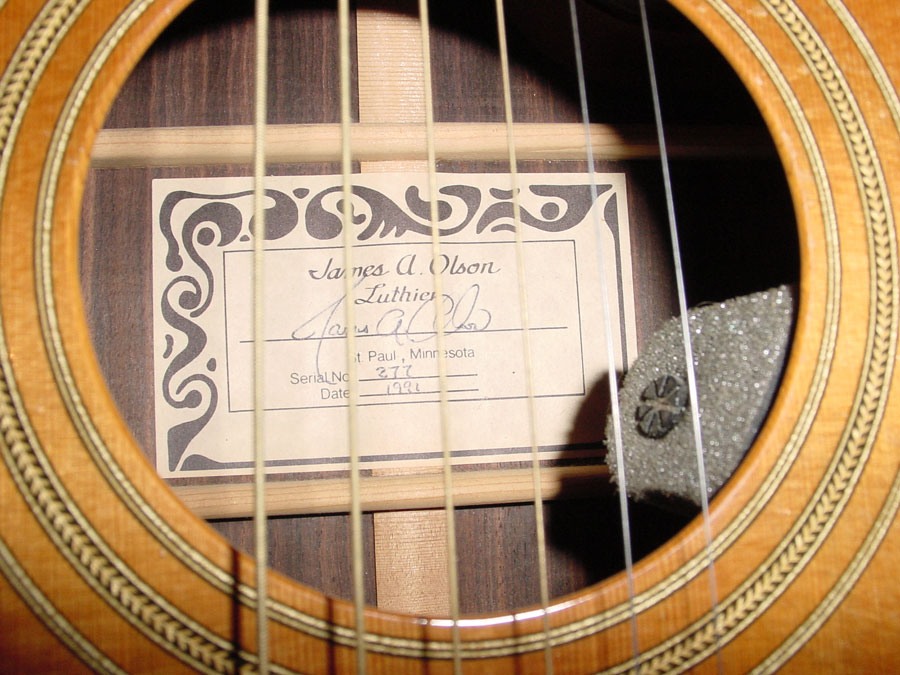 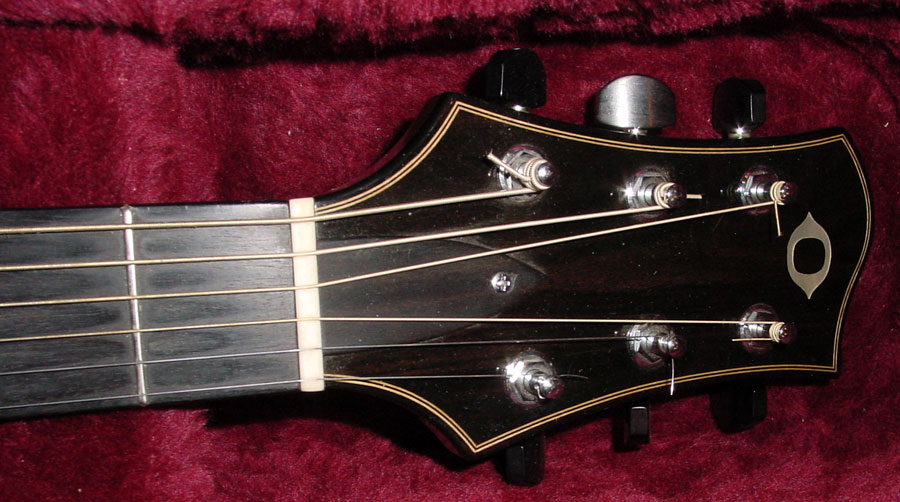 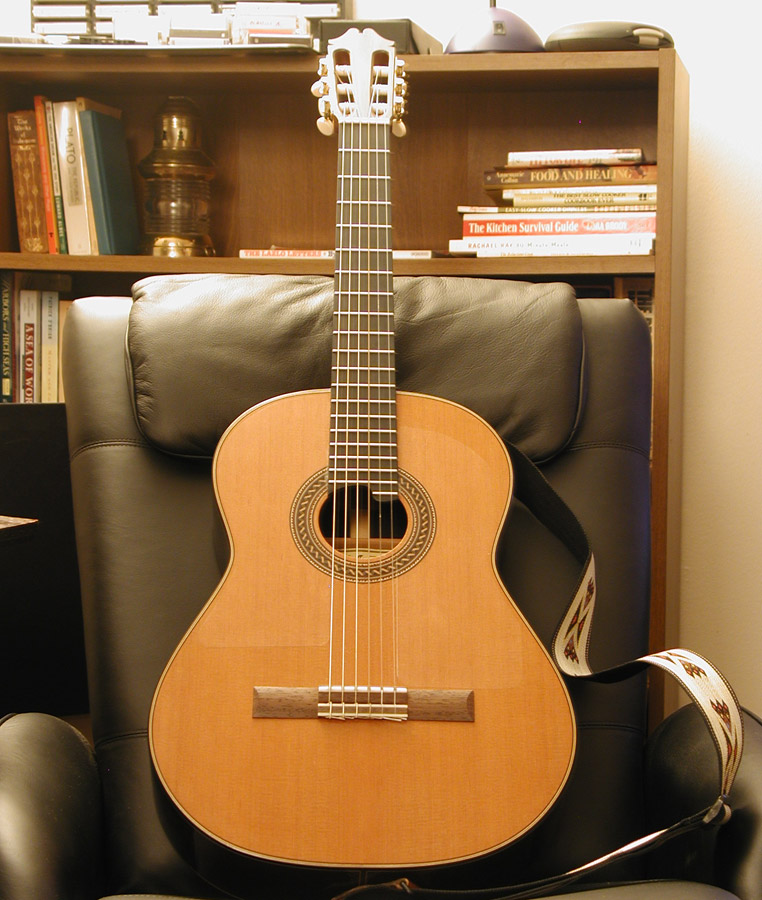 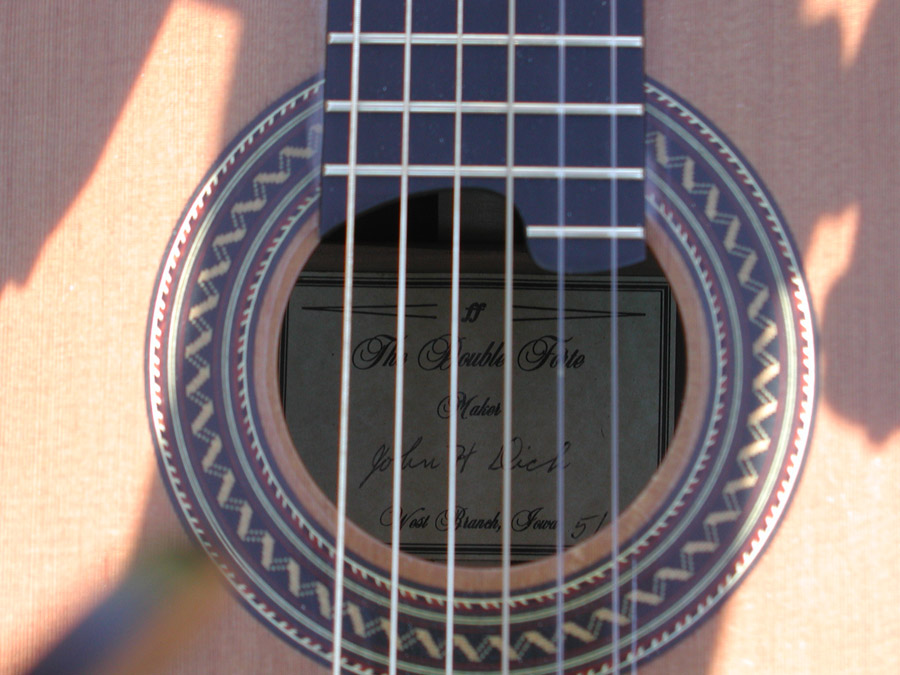 Dick classical - "I did buy that new guitar, made by the wonderful luthier, John Dick. So, humbly, I have a new Dick. I bought him last September, and named him, humbly, "Big Dick Johnson".
--Michael Johnson, February 2002

Guitars are From Mars - Women are Too


Guitars are alive. They breathe, they break—they even break hearts. "A chattel with a soul," as Segovia put it. Auggie Rassmussen, a luthier from Chicago I met years ago, used to say that you have to build a guitar knowing what the wood is going to do. It's going to shrink, crack, expand in the humidity, dry out, etc. "Nozingk vill stop ze voot," he'd say.

I've had three stolen from me. One, a very expensive designer thing that had no real sound or soul; another was an ancient and beautiful Martin 000-18, and my soul mate was an old Guild Mark IV classical guitar. The top had been damaged, and a guy in a small shop in a subway station in Barcelona had replaced it with an old Fleta top. We drove around the neighborhood looking for that one, trying my ESP on it. You'll try anything. I thought I did feel a couple of pulls a time or two, but no results. Somebody's out there playing Proud Mary on it right now. And of course, I drove over one.

It was a friend of ten years or more. The vacation was over. In a Karmann Ghia filled with skis and bags, we were heading home from the airport, just entering the freeway. I was sure the passenger door was latched. It wasn't. I can still hear the sound of that nylon gig bag sliding out the door followed by that muffled thump. Was that a rabbit? It wasn't. I remember opening the case on the highway and seeing the splinters and the broken body and neck. It took Mr. Numb a week to begin to feel the loss, like a death in the family. I took it to Joe, my guitar guru in Nashville, where they worked on it for a year, mostly on weekends. There was quite a celebration when I finally got it back. It never did sound the same, though. I had to retire the case, too. It had tire treads on it.

I was in Springfield, Illinois, doing a gig six months before I drove over "Ace." Feeling hypocritical, I went to the Dauphin guitar warehouse in town. It was the largest importer of Kohnos in the country, and I had to have a look. "Just in case," I thought. Well, this one guitar started humming at me when I walked past it, like when you're at the pet store and see the right puppy and you just know. Anyway, I figured that someday I'd maybe, you know, like, kind of, buy it. They said they'd let me know before they sold it to someone else. They never did. They move stuff pretty quickly there and I figured it was gone. So, after the big crunch, I called them. They looked all over the place and told me that they must have sold it. Mr. Numb said he understood. An hour later they called me back. They said the reason they couldn't find it was that it was in a closet in the back of the shop, covered with dust. My name was taped to the case. They'd been holding it for me.

I have left guitars outside the door of my hotel room on at least three occasions. I've sat paralyzed, watching them slide down a wall and crash to the floor. Once I was so nervous before a show that I strung one up almost completely backwards. That same day I cut the nails on the wrong hand. Later, after we'd flown to the next town, I opened my case to find that it was empty. I had left her lying on a hotel bed a thousand miles away. She made the gig though—they flew her to me, wrapped in a paper bag.

My guitars have persevered in spite of my treatment of them. I persevere because I have to make music, and because my guitar is sounding better than ever.

I've heard it said that some guitars are reincarnated into beautiful girls. That would be bad. People stuff cigarettes in between her strings, up by her tuning pegs. They spill drinks on her, which run down her waist and hips; they scar up her back with their belt buckles. They even let others play her, with their acidic and acrid smelling hands. No way to treat a lady. And what if one day an enchanting young thing would walk up, look me in the eye and say, "Hi Michael, remember me?"

And then she'd shoot me. Most of my life I've confused women with art, so it has been second nature to personify guitars as women. Guitars (and cars) perform better when you name them. I've never had a problem determining the gender of a guitar. Like ships, they are usually feminine. Liza and Elizabeth were great friends of mine. Ace was my only boy. And there was Blue, my first electric guitar but like a ukulele I once knew, it was a neuter.

I bought a cheap classical one time—it sounded pretty good for a while. It said "Made in Spain" on its fancy label. After it developed a buzz, I decided it was the label rattling, so I tore it out. Underneath it was another label, in Japanese. I called the import company to rage at them. As it turned out, "Sure enough, that label was made in Spain." That's the only time a guitar has ever lied to me.

Otherwise they have all been true. They have mirrored my connection to or separation from myself. So often I'll start to play—a day, or even a week after a show—and there it will be: all the energy of the last moment I spent with her, of the last chord, the tension, the intonation, and of how it all felt at the end.

So, for many reasons, I'm more respectful now. I am a better friend. Women have turned out to be more than art. They are people. This, of course, frightens me. I'm working on that, too.

Written by Michael Johnson for Between the Strings, The Secret Lives of Guitars - John August Schroeter 2004